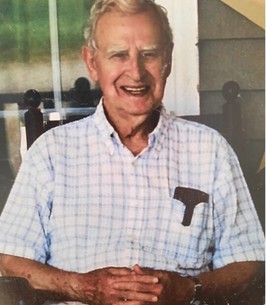 Reeves, George M.-Formerly of Kentville, NS. Passed away on January 26,2022 at Belmont Longterm
Care, Belleville, ON. just 16 days short of his 99 th Birthday. Born in Sydney, NS. in February 1923, he was
the son of George W. and Mildred (Mackley) Reeves. Predeceased by his wife Elizabeth (Beth Harvie) of
50 years, his son Jeffrey and his two brothers Bob and Bill. George is survived by his son Mark (Cynthia)
Brighton, ON and his daughter Susan (Grant) of Belleville, ON., his brother-in-law Burt Harvie BC., and
his sisters-in-law Donna Sleigh, Kentville, Charlotte Harvie Starratt, Lower Sackville (both of whom
practically adopted Dad into their lives after Mom’s passing which meant a tremendous amount to him),
sister-in-law Mona Reeves, Sydney and numerous Nephews and Nieces.
After his education at Sydney Academy, Dad worked at the steel plant in the foundry and machine shop
prior to enlisting in the R.C.A.F. and chosen to be part of the British Commonwealth Air Crew training
program. After the War ended, Dad entered Acadia University and graduated with a BA in history and
economics. While at Acadia, Dad was manager of the Varsity Football team, student finance committee
and the treasurer of the Student Union. After graduating in 1949, Dad’s business career was interesting
in that he started as a passenger agent with Trans Canada Airlines in Halifax and then as a sales
representative in Saint John, NB. before joining General Motors Products of Canada as a District Sales
Manager. It was in 1956 at Trans Canada Airlines that Dad met the girl he had been waiting for all his
life, our Mom, Beth, and he married her in July 1957 in what was to become 50 years of a very happy
wedded life. Mark, Jeff and Sue made it even more interesting.

After turning down an offer from GM of a car dealership, Dad became a proprietor of a Canadian Tire
Store in Kentville, NS. In 1962. Along the way, Dad was a member of several service clubs as well as
Toastmaster, 25 year member of the Kentville Masonic Lodge #58, Board of Stewards of the United
Church of St. Paul and St. Stephen, Kentville, NS and a member of the Bridgetown United Baptist Church.
Golf and sailing were dad’s favorite past times having belonged to several golf clubs, his favorite being
the Eden Golf and Country Club in Paradise, NS., as well as several yacht clubs in Cape Breton to Halifax
and Aylesford Lake. Our Family spent many happy years at the cottage on Aylesford Lake and one fact
emerged quite clearly…Dad was a better sailor than he was a golfer.

Dad will be greatly missed as the Reeves family patriarch. Cremation has taken place in Belleville. At
Dad’s request there will be no visitation or funeral services. A private family interment will be held at a
later date. In lieu of flowers, donations in Dad’s memory may be made to the Valley Regional Hospital
Foundation or the Charity of Choice. If you want to truly honor his memory, have lunch at Wheatons in
Berwick an order a piece of Coconut Cream Cake! Online condolences may be made through
www.middletonfuneralhomes.com

This obituary is protected by copyright by Belleville Chapel. Proudly Serving the Communities of Stirling, Belleville, Trenton, Bayside, Brighton, Frankford, and Picton. Belleville Chapel is located in the province of Ontario, Canada.

All rights reserved. This obituary is also archived at obittree.com